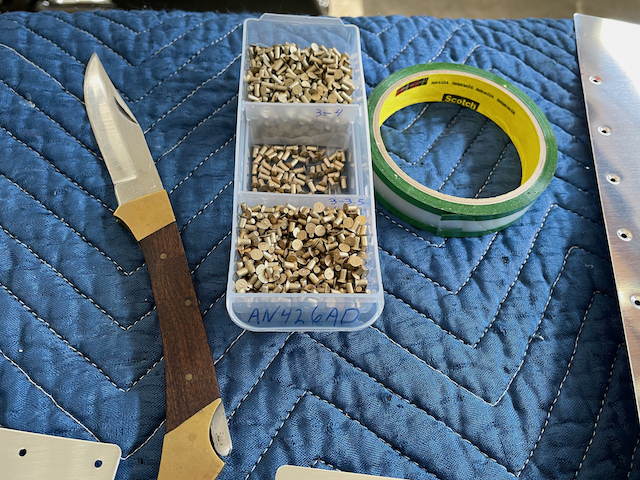 Day 8 – Riveting the stiffeners to the rudder skins

Today’s job was to rivet the stiffeners to the skins. The primary technique required is back-riveting. I quite like this technique as it is easier to do than shooting rivets the normal way. The gun fits nicely over the shop head and can bounce around a bit without destroying your work like I did with some practice kits driving flat head rivets. I started off feeling great about myself. I got through the first line of rivets and realized I had done something dumb… I forgot the stiffener! I was SOO focused on the quality of the rivet, I overlooked the most critical element.. the parts! So, my pretty little rivets had to get drilled out. This was of course scary, cause all I could think of now was ruining my skins. I tried something unusual when drilling them out, which kinda worked well for me! I left the riveters tape (green stripes in the photo) on and drilled through it. My theory was that it would maybe make the drill less likely to run off the head. It seemed to help, but sheer terror may have also been the major contributing factor. In any case, the riveters tape is awesome. After fixing a second mistake later, I put a single rivet in WITHOUT putting the tape on first. The result was the back-rivet plate scratched the skin way more. That is the last time I try that!