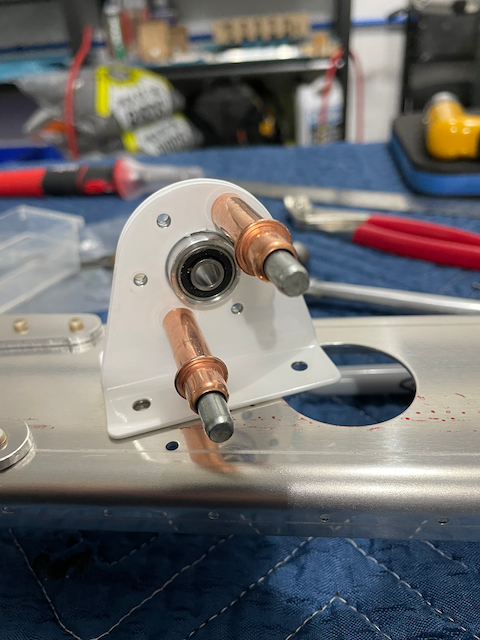 Today I assembled the rear spar for the horizontal stabilizer. The tasks involved were preparing and mounting hinge brackets and attaching the doubler to the spar with a great pile of rivets.

Attaching the doubler to the spare web was nothing too difficult. To start, I removed ALL the plastic (I hope you are happy LOL) and clecoed the parts in place. Riveting went well, but I made a “smiley” on one that was unforgivable, so I drilled it out and re-did it. This always make me nervous and I SERIOUSLY considered letting it slide… but I worried I would see it again later, so I broke down! To help myself avoid mis-riveting, I taped off the hole that were not to be riveted and checked it twice (luckily).

Most of my prep work on the hinge brackets was already done from the day before. Today though, I added a couple steps. Firstly, I scuffed the brackets up with Scotch-Brite to prepare them for paint (one day), and secondly, I removed ALL the little labels. I was worried the paper stickers may one day hold moisture, so I scratched them off and cleaned up ALL the goo. I used a second step of cleaning with alcohol to get all the goo-gone off the parts.

The final step of the night was to assemble and attach the inboard hinge bracket assembly to the spar. The manual called for 28″ pounds on the four nuts. That felt a bit light to me, but I guess that is why we measure!